The 35th year of marriage is a milestone for any couple, and represents a great chance for you to pull out the stops and celebrate with your parents. In the 1920s the first gift list was created, associating a specific material with every milestone marital year, and the 35th wedding anniversary was one of the occasions singled out for attention. Therefore, there is a symbolic gift which is traditionally given on this occasion and you can incorporate the theme into your choice of 35th anniversary gift for parents. If, on the other hand, your parents have more contemporary tastes, there is a modern gift choice from the more up to date gift lists that you could select. Whatever you think your parents will love, you are sure to be inspired by these ideas to find a present that is not only thoughtful but will make their 35th anniversary a memorable occasion. 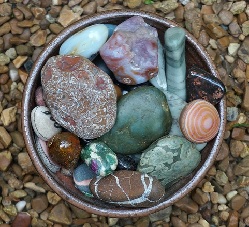 In the 1920s, coral was assigned to the 35th wedding anniversary as its traditional theme. At the time, coral was not known to be endangered, however in more recent times as we have developed a greater ecological awareness, we now know that the world’s coral reefs are under threat. This may deter you from choosing a coral 35 year anniversary gift for parents for environmental and ethical reasons. Historically, coral has been used for a number of purposes, including for making medicines and even as a building material, although primarily it has been used for decorative and ornamental purposes. Coral has been existence for over 542 million years and was once abundant all over the world however today, the reefs are finding it hard to survive. They face many threats including pollution, canal digging and over fishing as well as coral mining. Sea levels and temperatures are also rising and the pH balance of the sea water is also becoming more acidic because of greenhouse gases which has led to 10% of coral reefs now having died. 60% of those remaining are now under threat, especially those in south east Asia. Several governments are now seeking to protect their natural coral by making its removal illegal. There are also other organisations which work hard to restore coral’s natural habitat while raising ecological awareness and managing fishing. There are also Marine Protected Areas and Biosphere reserves which have been set up to conserve coral. This all means that presenting your parents with a gift of real coral is not recommended, despite it being the traditional 35th wedding anniversary gift.

Should you wish to give your parents a traditional coral thirty fifth wedding anniversary gift without any of the ecological concerns, there are imitation coral gifts which look very like the original thing. A stylish coral-style ornament made from resin would reflect this year’s traditional theme while not harming the environment. Alternatively, your parents may appreciate some imitation coral jewellery, with a pair of coral earrings being an ideal 35th anniversary gift for her and a pair of stylish coral cufflinks making a perfect 35th wedding anniversary gift for him. 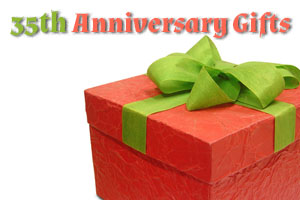 If you would rather steer away from the ethical dilemma that coral represents, why not go for a more modern take on 35 year anniversary gifts? Jade was linked with this marital year in the more recent anniversary gift lists and is a pretty and prestigious stone that would make a wonderful memento for your parents on this special year. Two types of stone are known as jade – nephrite and jadeite. Considered to be especially valuable in eastern cultures, since neolithic times jade has been used to make many items such as ceremonial ornaments, placed in the tombs of Chinese ancient kings. Once called the Imperial Gem, it has been especially significant in China, holding a value as high as gold or diamonds. It has also been considered to be important to Korean and Indian cultures, and is found all over the world including in New Zealand, Taiwan and Canada. Symbolically, jade represents good fortune and luck and is thought to bring long life to the recipient. Blessing those it touches, jade promotes healing and dispels negative thoughts. These are lovely sentiments to wish your parents on the occasion of their 35 year wedding anniversary, so why not choose a carved jade ornament, or a more functional jade gift such as an ash tray, wine bottle stopper or paperweight as a symbolic memento of this anniversary year.

Choose Flowers as a 35th Anniversary Gift for Parents

Perhaps neither the modern nor traditional thirty fifth wedding anniversary gift holds an appeal for your parents. In that case, flowers represent a perfect alternative. Magnificent and beautiful, you are sure to impress your loved ones with blooms of any variety, ideally conveying your best wishes and truest sentiments. Capture the essence of this anniversary’s jade or coral themes by surprising your parents with an orange or green glazed Eternity Rose. Each flower is a unique work of art that has been created by talented craftsmen from a natural, colourful rose blossom. Perfectly preserved, each blossom is trimmed with purest 24 karat gold and is placed in its own stylish leather case, ready to display in any room of the home as a luxurious memento of this special time in your parents’ lives.