For several reasons, the 33rd anniversary is often not given top priority by parents who have finally got to this marital year. As it isn’t a recognised milestone and has no famous theme or symbol it is often simple to forget to arrange a celebration or make any kind of fuss so the occasion slips by without notice. However you should take this opportunity, like every other year, to show your parents that you admire, love and appreciate them. There are some interesting ideas for 33rd anniversary gifts for parents so whether they love something traditional or cherish modern tokens, there is sure to be a 33rd wedding anniversary gift that they will delight in receiving and which will commemorate the day in memorable style.

What is the 33rd Anniversary Traditional Gift? 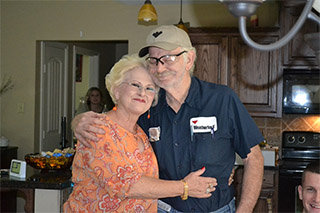 Some anniversaries are known all over the world for their themes and symbols while other years are lesser known. For example the 50th wedding anniversary is celebrated throughout the world for its association to the precious metal gold, while the silver wedding on the 25th wedding anniversary is known and loved across the globe for its own famous symbol. The 33rd anniversary, like so many other years, has no such well known motif. During the 1920s when the original lists were created linking materials with marital years, only the first 10 years were highlighted as being special enough to warrant attention, followed by every fifth milestone year. However in more recent times, as modern lists were drawn up, the other marital years finally became appreciated for the achievement that they represent and were assigned their own themes, with the 33rd year of marriage being associated with amethyst. If you give your parents a gift of amethysts on their 33rd wedding anniversary you are presenting them with a wonderful and thoughtful token of appreciation, steeping in symbolism and meaning and which also demonstrates the amount of effort and thought that you have dedicated to finding a truly suitable and memorable gift.

What is the Significance of an Amethyst Gift?

For countless centuries, the amethyst has been a most prized gemstone, often considered to be of equal if not greater value than diamonds. There are amethysts among the collections of many of the world’s royal and noble families and also in famous museums, for example the Smithsonian where there is an amethyst which weighs 400 lbs! In the history of religion, the amethyst’s purple shading was though to be a representation of Christ’s special colour. As such, it was used as the stone in Bishops’ rings and it has even found its own mention in the Bible. The amethyst has also featured

in other ancient civilizations. In Greek legend, Amethyst was a virgin which had somehow enraged the god Dionysus who was drunk. She called upon the goddess Diana for assistance and she was promptly turned into a white stone. Dionysus was so horrified when he became sober that he sobbed into his cup of wine causing it to spill over, staining the stone. The purple stone was named after the virgin herself, amethyst. It has served many purposes over the years including as a treatment for skin problems, as a detox agent, a headache cure, and a treatment for stomach pain. Its other symbolic meanings include use as a protector for soldiers in combat, as a way of controlling evil thought, to improve a business man’s skills, and as a way to ward off illness. It is also symbolic of humility and modesty, and brings the wearer good fortune and wealth in the future. Giving your parents a 33 year anniversary gift made from amethyst you will be presenting them with a gift that is reflective of years of symbolism. It is a token with the ultimate depths of significance which captures the essence of this marital year’s theme while offering your parents positive thoughts and wishes for the years ahead.

If you want to give your parents a traditional 33 year anniversary year, there are lots of choices of amethyst jewellery to pick from. If this striking gemstone is set into a silver or gold setting, it is incredibly beautiful and any pendant, ring or bracelet encrusted with this fabulous stone would make a great thirty third anniversary gift for her while a smart tie pin or pair of sophisticated cufflinks would be a fantastic 33rd anniversary gift for him. If jewellery doesn’t appeal, why not go for the purple colouring of amethyst for your gift instead, taking the essence of this anniversary theme in a different direction? Purple accessories, clothing, textiles, ornaments or homewares are all sure to be appreciated, or what about a pair of matching monogrammed purple bath robes or a personalised purple embroidered cushion for a truly bespoke touch.

Giving Flowers to Your Parents on Their 33rd Anniversary

Flowers are always a great choice of anniversary gift on both the 33rd anniversary and on any other marital year. As there is no specific traditional flower linked to this year of marriage you are free to select any type of blossom that you think your parents will love. Roses are always a good choice as there are extremely beautiful and bring love and romance to mind. If you would like to reflect the amethyst purple colouration in a rose themed gift, why not give the lasting token of a purple glazed Eternity Rose? Each flower is a true work of art, formed from a hand picked natural rose blossom and preserved in its prime by skilled craftsmen. Coated in an intricate glaze, each bloom is then trimmed with a pure edging of 24 karat gold ready to be presented in its own stylish and prestigious leather case. When displayed on your parent’s mantelpiece or in their display cabinet, it will be an enduring testament to their deep devotion and a symbol of your love and esteem.