Choosing the right anniversary present for your parents may not be easy, especially when you feel that you have already given them all the usual and customary anniversary gifts. Once it comes to finding the right 14th anniversary gifts for parents, you may be running short of inspiration. However there are lots of ideas here that aim to help you make the right choice of 14 year anniversary gifts for your parents, with suggestions from the traditional to the contemporary which is sure to include something to perfectly suit their tastes. Show them how much you care at this special time in their married lives with a present that is as thoughtful as it is significant. 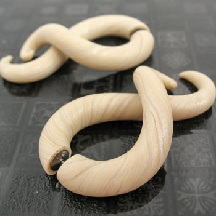 While many anniversary years have a simple and straightforward traditional material associated with them, the 14th anniversary is not so easy as its traditional theme is ivory. While this may not have posed a problem when the traditional lists were drawn up in the first half of the 20th century, today because of the decimated elephant populations due to ivory hunters, ivory is not an ethically sound choice of 14 year anniversary gift for parents or any other recipients. If however you do wish to go down the road of an ivory themed gift, there is an imitation ivory that has been created with a similar appearance to the original. Buy a faux ivory statue or sculpture to decorate the home, or alternatively, give a more personal gift to each partner with a piece of elegant imitation ivory jewellery as the ideal 14th wedding anniversary gift for her and a faux ivory shaving set as the perfect fourteen year anniversary gift for him.

As ivory is now considered to be unacceptable as a gift choice, elephants have now frequently taken their place as a popular alternative 14 year anniversary gift. Elephants are known to be wise, with long memories just like married couples, and in Indian mythology they bring with them a wish for good fortune, which makes them an appropriate gift choice. Give your parents the gift of an elephant statue or elephant patterned homewares and bring good luck into their lives on the occasion of their 14th wedding anniversary.

For those who wish to avoid the ethical minefield of ivory, the contemporary alternative theme may be a good choice. Gold jewellery is the modern 14th anniversary gift and is a wonderful and lasting way to mark the occasion for your parents. A gold tie pin, simple chain or pair of cufflinks are all great 14 year anniversary gifts for him while there are a wealth of gold jewellery options that would be perfect 14th anniversary gifts for her. One timelessly elegant gold jewellery gift is a beautiful pendant and earrings sets from Eternity Rose. Fashioned from genuine miniature rose petals that have been perfectly glazed and trimmed with pure 24 karat gold, each pendant comes with its own gold-dipped multilink chain while each pair of earrings comes with either a ringlet or classic leaf design and is encrusted with glittering synthetic diamonds.

Floral gifts are among the most popular of anniversary gifts for any year and it is easy to see why. Thanks to their elegance and beautiful simplicity, they convey all the appreciation and care felt for the recipient while demonstrating the giver’s esteem and love in a truly gorgeous way. If you wish to give your parents a 14th anniversary gift that has an extra layer of meaning, choose a bouquet that comprises the traditional flower for this anniversary year, the dahlia. This beautiful bloom has a meaning that is very significant on this occasion, wishing the couple meaningful blessings while representing their inner strength and praising them for their adherence to their sacred values, an appropriate sentiment for a couple who have been true to each other for 14 years. For a floral choice that is even safer and sure to impress, why not opt instead for a bouquet of gorgeous roses? 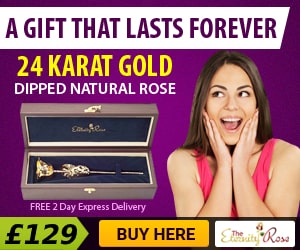 These stunning blossoms never fail to delight the recipients and with their associated meaning of love, appreciation and timeless beauty they are always a great choice for any anniversary year, bringing light and life into the marital home. Unfortunately, freshly cut bouquets can only ever last for a few days before withering away and losing their beauty, however there is an alternative rose gift whose beauty will endure for a lifetime.

Eternity Rose have perfected the art of preserving a natural rose’s splendour in an intricate and complex glazing process that takes no less than three months and results in an elegant and magnificent work of art that is as unique as it is spectacular. Produced from a hand picked rose blossom, selected at the height of its perfection, each gorgeous, specially chosen flower is trimmed with a pure 24 karat gold edging and comes presented in its own stylish and prestigious leather presentation case. There is no better way to display this lavish token of esteem in the marital home, where it will be a focal point that will be admired and treasured for years to come before being passed down the generations as a cherished heirloom.